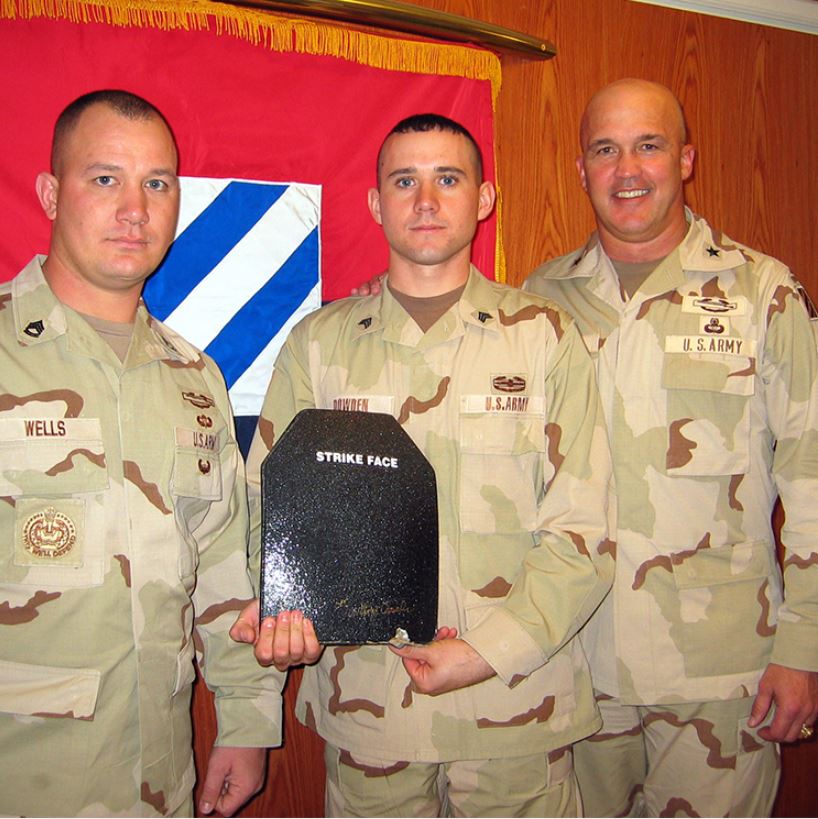 Bullet Proof Ballistic Plate Presented to Secretary of Defense, Donald Rumsfeld Washington, DC. (April 18, 2005) -The article below is taken from the American Forces Press Services. According to the ballistic plate manufacturer, the plate being handed to Secretary of Defense, Donald Rumsfeld was one of over 50,000 LINE-X coated plates in service in Iraq and Afghanistan.

WASHINGTON, April 18, 2005 – Less than a month ago, Army Spc. Anthony Dowden was shot in the back with a sniper rifle. But he survived with nothing more serious than bruises, thanks to a new high-tech “small-arms protective insert” armored plate in his ballistic vest.

The 22-year-old tank crewman, deployed from Fort Stewart, Ga., was on a routine security patrol here March 22. After spending some time performing “overwatch” at a checkpoint, Dowden stood up in his tank’s turret to get a better look at a young Iraqi man with what appeared to be an AK-47 rifle.

He soon realized the young man had a pellet gun and posed no threat.

“After a few minutes of observing him wondering why he was running around, what exactly he was doing, I put my binoculars down and looked down inside my tank to look for footing to lower myself down,” Dowden said in an interview with American Forces Press Service. “And that’s when I got hit.”

He said his unit’s leaders believe he was shot with a sniper rifle.

“I felt just this incredible force on my back,” Dowden said. “It threw me forward.

The shot took a divot out of the lower edge of the armor plate and resulted in a bruised kidney and “a massive bruise” on the side of Dowden’s back. Paperwork has been submitted to award the Hilton Head, S.C., native a Purple Heart medal.

Dowden, a member of 1st Battalion, 64th Armor Regiment, of the 3rd Infantry Division, said he feels without a doubt that the SAPI plate saved his life. He said he believes he’s well-served by the Army-issued protective equipment. “It’s the best that we can get right now,” he said.

During an April 11 visit to Baghdad by Defense Secretary Donald H. Rumsfeld, Dowden and his division commander, Maj. Gen. William Webster, presented the damaged plate to the secretary as a memento.

“Thank goodness this sniper round hit this SAPI plate,” Webster said during a town hall-style meeting here. “This is his SAPI plate that he’d like to present to you, sir, for all the things you do for our soldiers.”

Dowden later said it wasn’t his idea to present the plate to Rumsfeld, “but it sounded like a good idea.”

SAPI plates are designed to stop a 7.62 mm round, which is standard AK-47 rifle ammunition, a DoD spokesman said. As of February 2004, all soldiers and Marines in Iraq and Afghanistan have the plates.